The bat uses biological sonar to navigate the jungle in the night. Their ultrasonic pulses can position the sound more accurately than the artificial sonar device. To replicate and harness this capability, IBM Academy Award winner Rolf MÃ¼ller designed a man-made bat ear in collaboration with his team at Virginia Tech.

They found that these bionic ears are not only very effective sonar devices, but also for speech recognition. 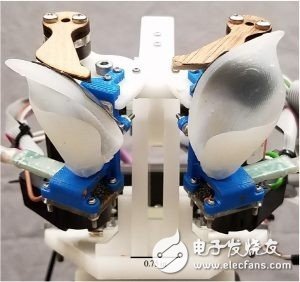 Artificial ear that mimics the bat

The research team copied a dynamic receiving system based on the ability of the bat to change the shape of the ear. It improves the accuracy of the Automatic Speech Recognition System (ASR) and more accurately locates the talker. Han Jinping will present this finding in their paper "Receiving dynamics inspired by the bud-headed bat to incorporate dynamic features into speech signals" and at the 172nd session of the American Acoustics Association this week.

These dynamic systems have the potential to evolve into voice-receiving devices that allow users to "listen like a bat." This will improve existing hearing aids and directional microphones. It can be applied to any scene that needs to locate and understand the sound source.

Imagine you are in a busy, noisy market. It is probably a challenge to hear what people around you are saying. With this technology, the voice of the companion can be recognized by a deformable hearing aid and then translated into words that you can understand. It can also filter out the noise of the downtown and the voices of other people.

The bat's ultrasound has a frequency of 10 â€“ 200 kHz, while the human ear can only recognize sounds of 20 Hz â€“ 20 kHz. So for us it's too loud, most of which can't be heard. In order to control the bat's biological sonar frequency and accuracy, Gupta joined the Han Jinping team to write code that converts the voice signal into ultrasonic pulses â€“ and then transforms the ultrasound into the normal language we can hear.

This first requires the creation of a database. In order to be as simple as possible, the Han Jinping team used the pronunciation of English letters and numbers of 11 American English readers in the open source database of Carnegie Mellon University.

With more available analytical data, researchers will begin to test the system with industry benchmarks and develop bionic learning algorithms. Or, in the future, they might develop a "listening" app that turns the smartphone microphone into a directional microphone that connects to the Internet of Things to help the user choose the sound he wants to hear in reality. IBM researchers believe that implementing it is not too far away.