First, the cause of leakage problems

Some on-site use inverter to control the motor, there will be leakage problems, and the leakage voltage may vary from tens of volts to two hundred volts. In response to this problem, the theoretical analysis and explanation of the causes of this fault are presented below. 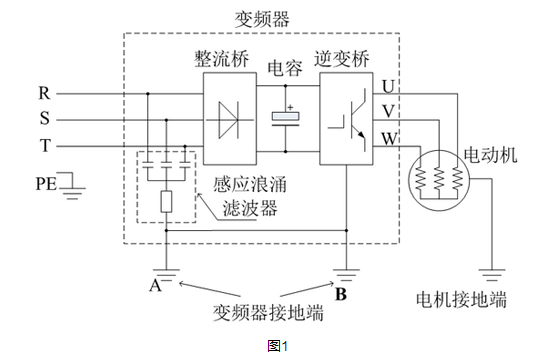 According to the functional block diagram of the inverter control motor operation (Fig. 1), the three-phase power supply is rectified by the inverter rectifier bridge, and then sent to the inverter bridge (IGBT) through the capacitor filter, and then the inverter bridge output frequency and voltage adjustable three. Phase alternating current to control the operation of the motor. Three alternating currents 120 degrees apart from each other flow through the three-phase stator coil windings of the electric motor to generate a rotating magnetic field, so that the rotor of the electric motor automatically rotates under the action of the rotating magnetic field of the stator winding.

Since the asynchronous motor runs, the motor casing will have an induced voltage (so-called leakage). Therefore, the motor manufacturer will install a grounding terminal in the junction box when the motor is shipped, so that the user can connect to the ground during application to eliminate It induces an electromotive force (ie, eliminates the induced leakage voltage) to solve the feeling of being charged when the human body contacts the motor. Of course, when the motor is running at the power frequency, the switching frequency of the power frequency is about 50 Hz, which is very low, so there is almost no leakage feeling under normal conditions (unless the motor insulation is poor). When the inverter is controlled, since the switching frequency is much higher than the power frequency, the inverter will have a leakage feeling when controlling the motor to rotate.

Second, the solution to the leakage problem 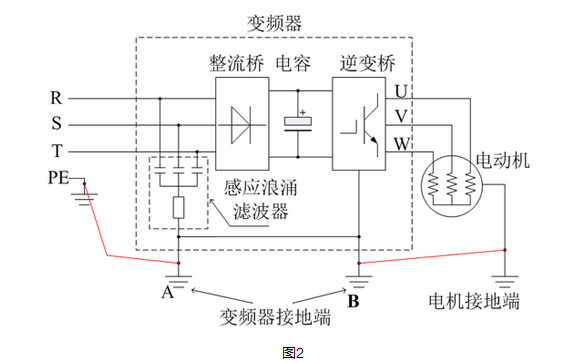 When the ground wire of the motor fails to connect with the grounding end of the inverter, and the ground wire of the power supply is not connected with the ground of the inverter, the outer casing of the mechanical equipment or the grounding end of the electric motor, the outer casing of the motor and the frequency conversion The outer casing of the device and the ground of the power supply (ie, the ground) are not at the same potential. If in this case, the induced voltage generated by the motor is 100V, the motor is racked together with a certain part of the mechanical equipment, because the ground wire of the power supply is not pulled in the power distribution room, and the human body's electrical equivalent model theory It can be equated with a resistance of about 2K ohms (if the human body sweats, the resistance value is smaller when wet, sometimes even only a few tens of ohms), when the human body stands on the ground and touches the metal of the equipment connected to the motor, the induction current of the motor (such as 100V) can discharge the earth to the earth, then the human body will have a current flowing, there will be a feeling of being charged. Although, in theory, the motor casing is connected to the frame of the mechanical equipment, and the frame of the equipment is mounted on the ground, it is reasonable to say that the person standing on the ground touches the equipment frame and should not be electrically touched by the induction. However, don't forget that although the earth is also a conductor, the earth is resistant, after all, and the resistance varies according to the soil composition of different land. Otherwise, why does the National Power Supply Bureau require that the grounding resistance of each substation transformer and the grounding resistance of each company's power distribution room be less than 4 ohms? Why is it not allowed to be approved if the grounding resistance of the substation or high-voltage power distribution room is not less than 4 ohms? In fact, this is the truth. When there is a distance between a person and a device, there will be an induced voltage. When the human body touches the device, there will be a current flowing through the human body, and there will be a feeling of being charged. It is only the size of the induced electricity, and the size of the person who is determined by the electricity is different.

However, in reality, some factories do not pull the power ground, the equipment can not find the grounding point, and the motor is in use, but there is induced leakage, how to deal with this situation? Here, we propose two options as follows: 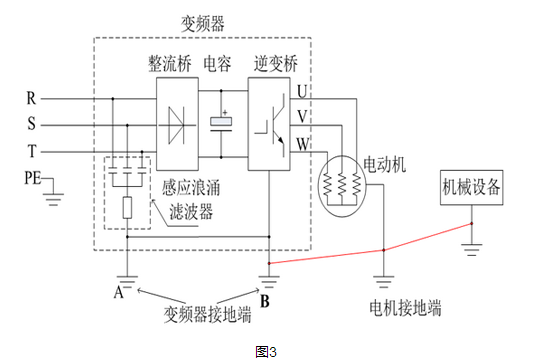 Option 2: Under normal circumstances, after the treatment of the first scheme, the induced voltage generated by the rotation of the motor is already very small, and it will not leak electricity, but for some special reasons (such as: poor motor insulation, electrical cabinet When there is no grounding, etc. when the appliance is installed, the induced voltage is still high, and there is a feeling of leakage of electricity, and the second scheme is proposed.

In the second scheme, an inductive surge filter is added to the input power terminal of the inverter under the premise of the first scheme. 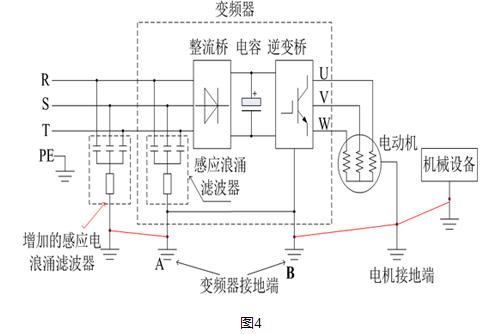 We have had a lot of experiments to prove that the on-site rectification of the connection method of the second scheme can reduce the induced voltage generated by the motor operation to below 20V in the application of the ground wire without the power supply, ensuring the on-site operator. The safety will no longer be felt by people who are leaking electricity. However, if the ground wire of the power line is connected in the second scheme, then no external inductive surge filter is needed. 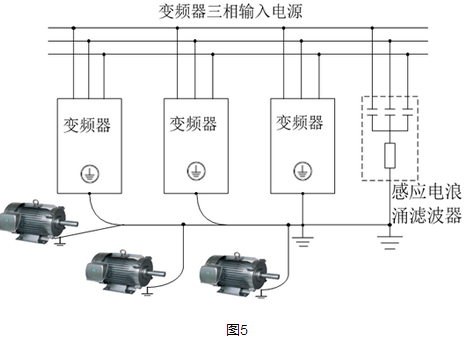