The directional valve uses the relative movement of the spool to the valve body to make the oil path switch on, off or change the direction of oil flow, so as to realize the start, stop or change the direction of movement of the hydraulic actuator and its driving mechanism.
According to the movement mode of the valve core relative to the valve body: the slide valve and the rotary valve according to the operation mode: manual, motorized, electromagnetic, hydraulic and electro-hydraulic, etc. The position in the valve body when working according to the valve core: two positions And three others. The number of channels controlled by the directional valve is different: two-way, three-way, four-way and five-way.
1. Working principle Figure 4-3a shows the working principle diagram of the spool valve. When the spool moves to the right by a certain distance, the pressure oil output by the hydraulic pump is transferred from the P port of the valve to the A port. The oil in the left chamber of the hydraulic cylinder and the right chamber of the hydraulic cylinder flow back to the tank through port B, and the piston of the hydraulic cylinder moves to the right; otherwise, if the spool moves to a certain distance to the left, the flow of fluid reverses and the piston moves to the left. Figure 4-3b is its graphical symbol.

Use a manual lever to change the position of the spool to achieve commutation. There are two types of spring automatic reset (a) and spring steel ball (b) positioning. 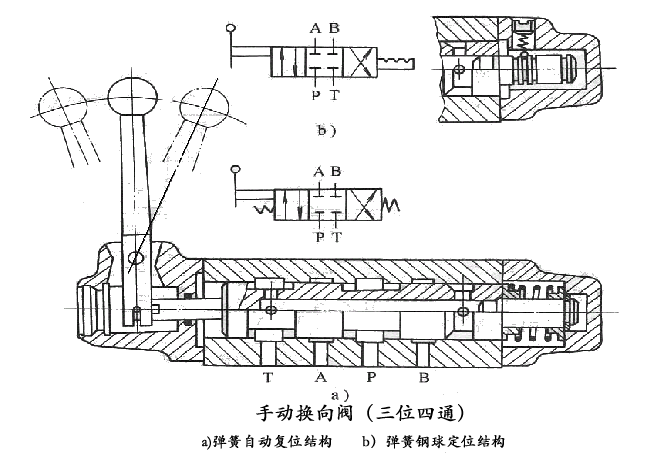 Motorized directional valve, also known as stroke valve, is mainly used to control the stroke of mechanical moving parts. With the help of the iron or cam installed on the work table, the valve core is forced to move, thereby controlling the direction of liquid flow.

Use the electromagnet's energization to pull in and out of power to directly push the spool to control the direction of liquid flow. It is a signal conversion element between the electrical system and the hydraulic system.

Figure 4-9a shows the structure of a two-position three-way AC solenoid valve. In the position shown in the figure, the ports P and A are connected, and the port B is disconnected; when the electromagnet is energized, the push rod 1 pushes the spool 2 to the right. At this time, the ports P and A are disconnected, and the B connected. When the solenoid is de-energized and released, the spring 3 pushes the spool to reset. Figure 4-9b is its graphical symbol. 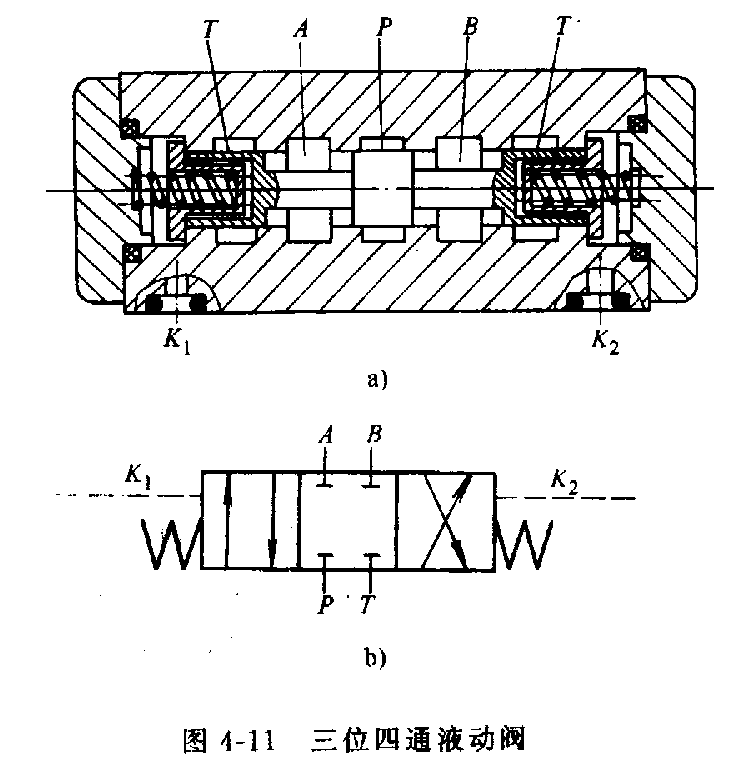 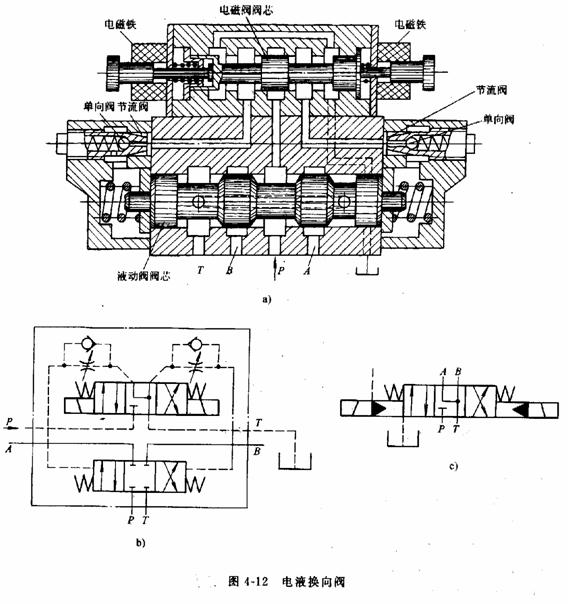 3. Performance and characteristics of directional valve

The three-position four-way and three-position five-way reversing spool valves of various operation modes, when the spool is in the middle position, the connection of each oil port is called the neutral position function of the reversing valve. Commonly used are "O" type, "H" type, "P" type, K "type," M "type, etc.

When analyzing and selecting the neutral function of the three-position directional valve, usually consider:

(4) When the starting smoothness valve is in the neutral position, a cavity of the hydraulic cylinder is connected to the oil tank. When starting, there is not enough oil to buffer, and the starting is not smooth.

(5) The hydraulic cylinder floats and stops at any position

(1) Steady-state hydrodynamic force: After the spool has been moved and the opening is fixed, the force acting on the spool due to the change in momentum when the fluid flows through the valve port has a tendency to close the valve port, which is related to the valve flow rate.


(2) Transient hydrodynamic force: During the movement of the spool, the force of the valve chamber fluid flow on the spool due to acceleration or deceleration is related to the movement speed.

Reasons for clamping: dirt enters the gap; the temperature rises and the valve core expands; but the main reason is the effect of the radial imbalance force caused by the change of the geometry and concentricity of the spool valve pair, which mainly includes:

a There is no geometric shape error between the valve core and the valve body, and the axis lines are parallel but not coincident

b The valve core has an inverted cone due to processing errors, and the axis lines are parallel but do not coincide

c There are some protrusions on the surface of the spool

We will update new products everymonth, and we join in Canton fair,Hk Lighting fair every year.

we looking foward  cooperation for long times with yours.